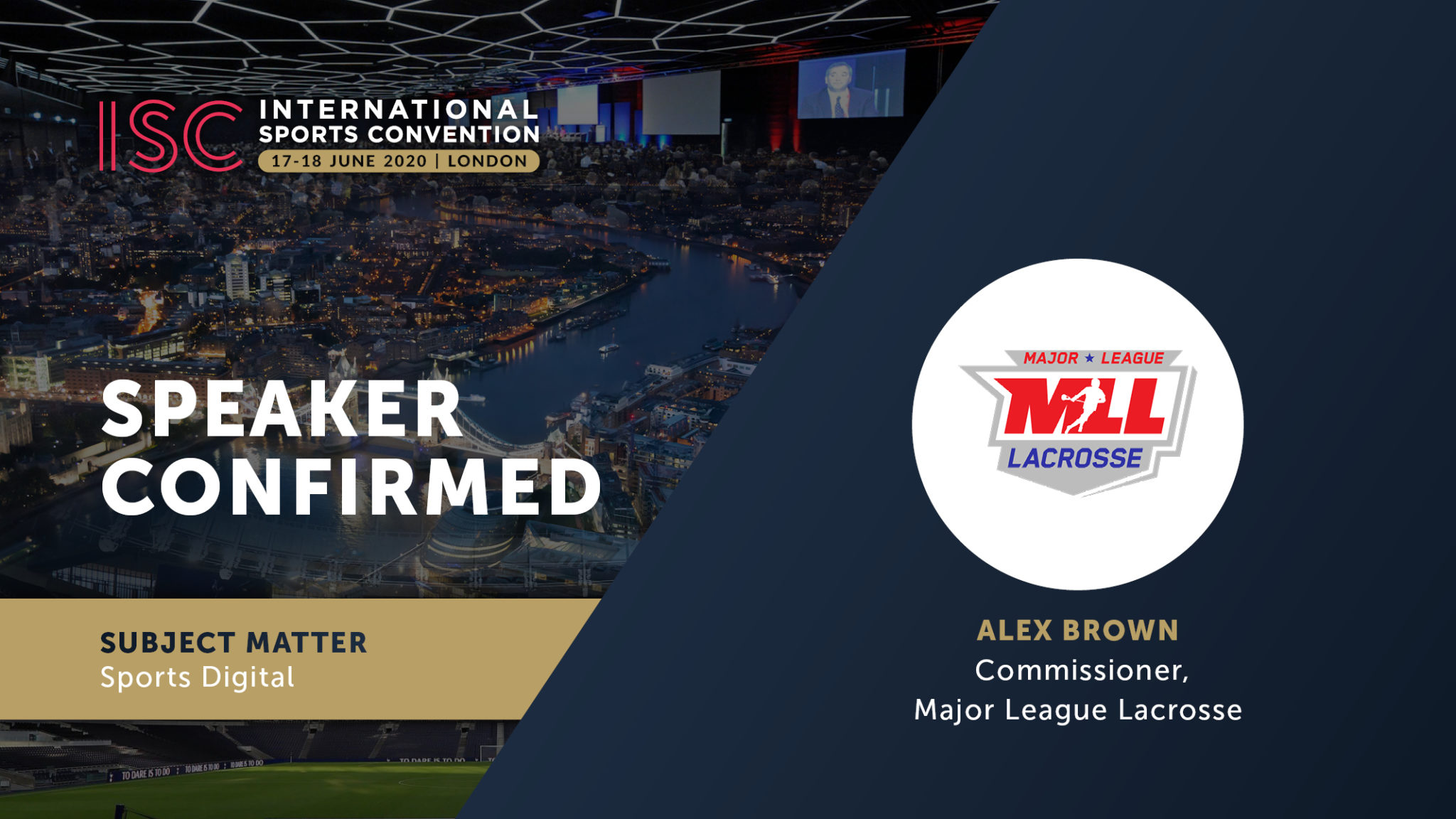 The International Sports Convention (ISC) is pleased to announce Alexander Brown as a speaker for the 2020 edition taking place on June 17-18, 2020 at The Tottenham Hotspur Stadium, London. Alexander is Commissioner of Major League Lacrosse.

Nigel Fletcher, CEO of the International Sports Convention: “We realize ISC is in eight months but we have a real focus in bringing in worldwide leaders and experts across the Sports Business Industry. ISC will have over 100 confirmed speakers come to the end of this year and much has been unveiled on the ISC website to date. I am delighted to welcome Alexander“.

The focus of ISC London 2020 is on the Business of Sport with around 1500 participants, including over 100 speakers with 7 sports business conferences, 3 masterclasses running over the 2 days, plus private roundtables and a range of hospitality and networking platforms. The main days are June 17-18, 2020. This includes comprehensive content and speakers from the Broadcast, Digital, OTT, Brands, Sponsorship, Integrity, Major events, and Technology. There will be 5 main stages each day.

The International Sports Convention has been hosted in Geneva and Amsterdam for the last 10 years and will move to London for the first time with an exciting sports business concept for the entire global industry. The venue is the Tottenham Hotspur Stadium.

The International Sports Convention is the meeting place for The Global Sports Business Industry and will be the largest global gathering in the first half of 2020.

The 7 Sports Conferences are:

During the summer of 1998, Jake “Body By Jake” Steinfeld was inspired to start a professional outdoor lacrosse league after reading a magazine article about the growth of the sport of lacrosse. Steinfeld sought out a contributor to the article, Owner and President of Warrior Lacrosse Dave Morrow, a leading lacrosse equipment manufacturer, to discuss the formation of such a league.

In February 1999 Steinfeld and Morrow joined forces with Steinfeld’s friend and business associate Tim Robertson, Chairman of Bay Shore Enterprises and former CEO of the Family Channel, to form Major League Lacrosse, LLC, a Virginia limited liability company. In 2003, New Balance Athletic Shoe Inc. came on board as a Founding Member of Major League Lacrosse, as well as an Anchor Level League Sponsor.

Major League Lacrosse began to play in 2001 to capitalize on the growing demand for world-class field lacrosse driven by dramatic growth in the U.S. lacrosse market. The MLL was praised and heralded for its on-field play, regarded as the best seen. With a year-on-year attendance increase, Major League Lacrosse has continued to lead the sport of lacrosse into the mainstream of competitive team sports. The MLL is the premier professional lacrosse league.
MLL TEAMS:

MLL is comprised of six teams across the US. The Boston Cannons, Chesapeake Bayhawks (formerly Baltimore and Washington), New York Lizards (formally Long Island) and Dallas Rattlers (formerly Rochester) are original teams starting in 2001. The Denver Outlaws began to play in 2006 as part of the League’s western expansion. The latest expansion team is the Atlanta Blaze, whose inaugural season was 2016.

Major League Lacrosse boasts the premier 230 lacrosse players in the world, who also hail from some of the nation’s top academic institutions. In contrast to other professional sports leagues, players are only eligible for the MLL Collegiate Draft after they have exhausted their four years of NCAA eligibility, giving MLL the highest graduation rate of any professional sport in North America.
MLL SEASON:

The 2019 schedule includes many changes advocated for by the league’s premier players, including a season start date after Memorial Day and an emphasis on playing weekend games. Besides, each team will play each other twice, the first time that has occurred since 2015, before the league expanded to include the Atlanta Blaze.
MLL GAME:

Major League Lacrosse has implemented some innovative dynamics to the traditional game of field lacrosse that bring the sport into the next millennium. MLL rule changes include the addition of a two-point goal line located 16 yards from each goal and a 60-second shot clock.
MLL – ANCHOR LEVEL PARTNERS:

MLL will continue its partnerships with both ESPN and Lax Sports Network (LSN) to bring games to screens across the country. For more information, please visit laxsn.com.

ESPN, via its ESPN+ service, will feature a Game of the Week. The league’s All-Star Game, taking place July 27, will be broadcast on ESPN2, while the Championship on September 29, will be shown on ESPNEWS. The All-Star game will be played in Navy-Marine Corps Memorial Stadium on July 27th. Championship Weekend will be September 27th – 29th and the location will be announced at a later date.