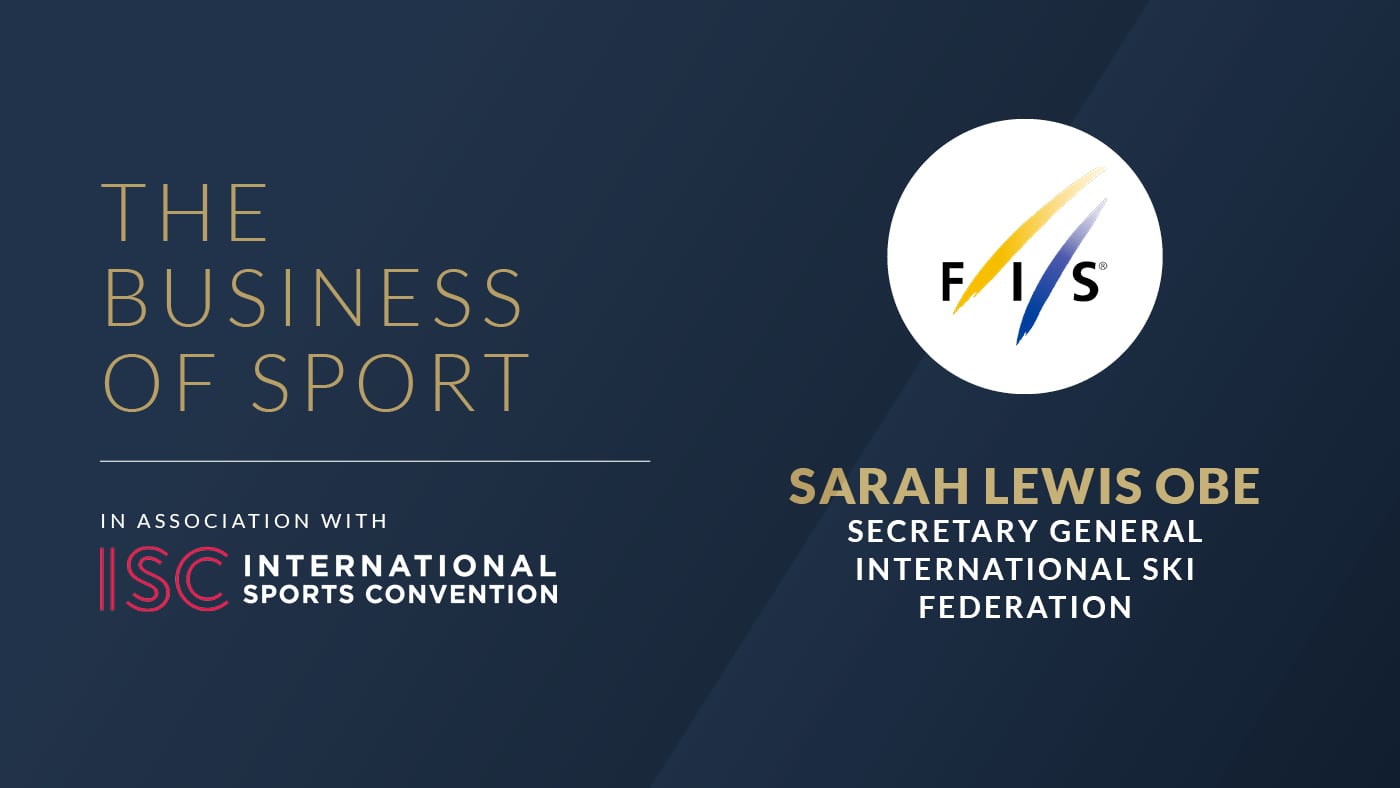 In the first in a series of Business of Sport podcasts with the International Sports Convention, Callum Murray speaks to Sarah Lewis, secretary general of the FIS, the international ski federation.

One of the very few women in a senior administrative and governance role in an international Olympic sport federation, Sarah joined the FIS in 1994, having been a member of the British Alpine Ski Team from 1982 to 1988 and competed in the 1987 FIS Alpine World Ski Championships and 1988 winter Olympic Games.

With a reputation for strong opinions and plain speaking, Sarah begins by addressing the Corona virus epidemic, after the FIS was forced to cancel one of its World Cup events scheduled to be held in China this spring, as a result of the outbreak. The event was due to be the first-ever FIS World Cup in China, as well as a test event for the 2022 winter Olympic Games in Beijing, but the FIS took the advice of its own medical commission, as well as the local organising committee and the Chinese Olympic Committee in making the difficult decision to cancel the event. The FIS will now consider how and when to reschedule the event, Sarah explains.

Two weeks before the podcast was recorded, Sarah had attended the third edition of the winter Youth Olympic Games, held in the Olympic capital of Lausanne, Switzerland. What does the FIS gain from participation in those games, and what did Sarah herself, a member of the IOC’s co-ordination commission for the games, learn from them?

For FIS, says Sarah, the games “provide a great opportunity to underline the importance of the development pathway for youth sports in a very high-profile setting, which is what the Olympic brand gives you.” The games also offer the opportunity to showcase new formats and create a workshop for the overall revised Olympic model, including decentralisation and the use of existing facilities.

The FIS has just launched its own eSports game, World Cup Racing, and Sarah goes on to discuss the eSports phenomenon. There has been some controversy over the IOC’s apparent flirtation with eSports. Some think computer games simply encourage inactivity; others regard eSports as valid sports in their own right. Could playing World Cup Ski Racing ever persuade a couch potato to put skis on and try the real thing? Yes, says Sarah, there’s research that shows that up to 10 per cent of games players could be provoked to try out skiing for real, albeit “perhaps not on a World Cup downhill course for their very first experience!”

The game represents “a new platform to promote skiing globally, a tool to reach out to an audience that we wouldn’t normally have daily contact with,” Sarah says, as well as an additional revenue stream, with skiing brands providing the prizes, while revenues from in-game purchases are shared between the FIS, the game developer and national ski associations.

Just two weeks after its launch, the game had received 50,000 unique installs from 170 countries, with 16,000 hours played, Sarah reveals.

In May 2020, there will be a FIS presidential election, with GianFranco Kaspar, the long-serving incumbent, due to step down after 22 years in the role. What are Sarah’s hopes for his successor, and could that person be a woman, for the first time in the FIS’s history?

A new president should remain true to the FIS’s core mission to develop snow sports throughout the world, despite an increasing emphasis on developing revenues, Sarah says, while pointing out that the federation is already practising positive discrimination in favour of women, with at least three places set to be reserved for women on its board in future.

Sarah also addresses the future of snow sports in an era of climate change, admitting that some low-lying resorts have been hard-hit, but stressing that many have diversified their income sources, by becoming year-round facilities catering for walkers and mountain bikers, as well as skiers. Meanwhile, the production of artificial snow has become much more efficient, using less water and less energy.

Sarah concludes the podcast with advice to young people seeking a career in sports administration, her most memorable sporting moment, her top sporting hero and an answer to the difficult question: ‘What is sport for?’