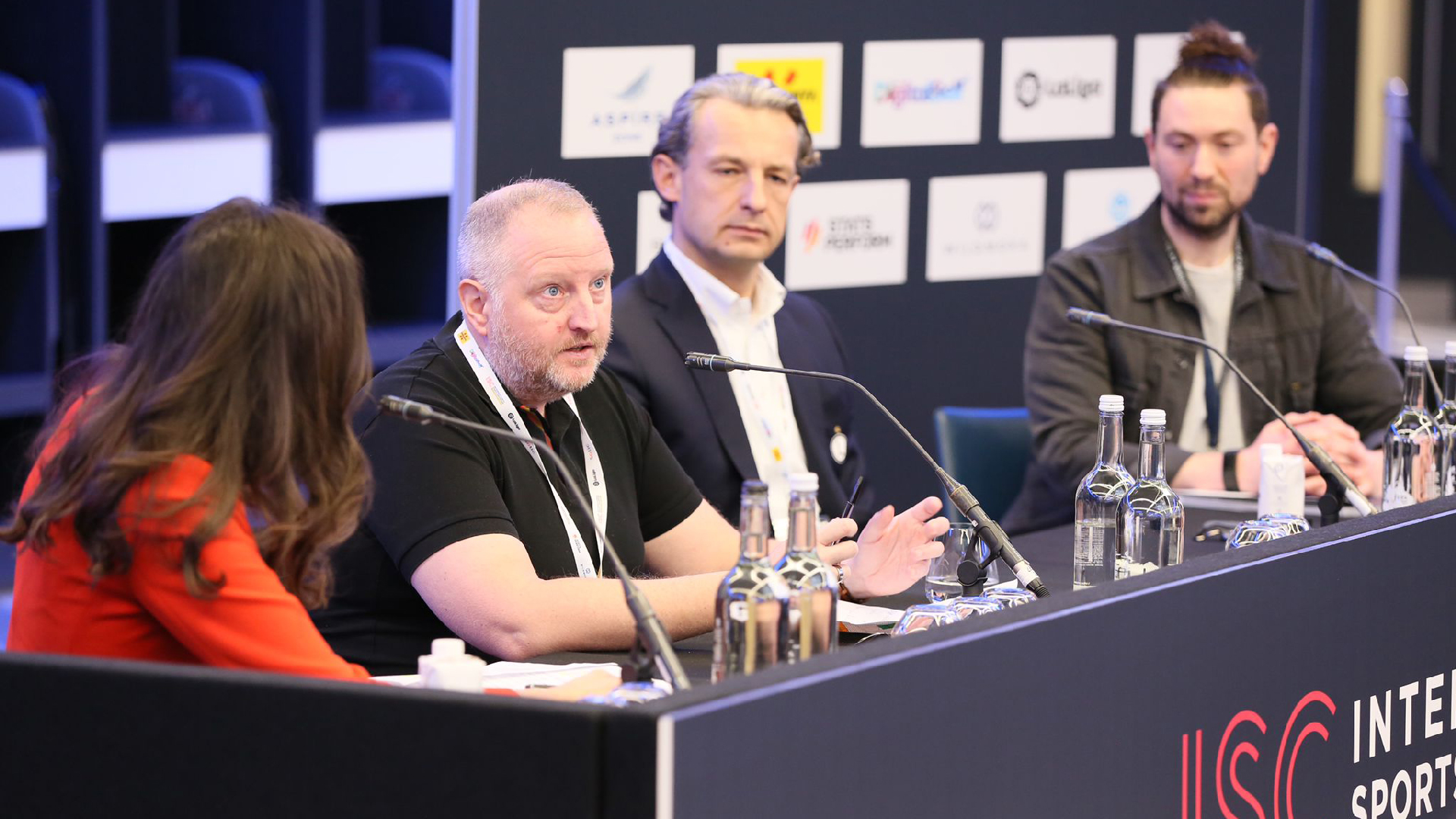 The panel discussion on digital and commercial growth in football on day 2 of ISC kicked off with Adam Griffiths talking about the problems of launching Tottenham Hotspur’s new stadium during a pandemic.

Zahorski of Legia Wasaw spoke of the need to be innovative in digitalisation, having signed a partner for cryptocurrency and an NFT agency. The club also partnered with Electronic Arts, meaning that each player has a FIFA game card.

Stefan Gunnarsson admitted that in the past the Icelandic FA had not been in the forefront of digital innovation, but now it has launched an app to increase participation and enable grassroots players to interact with their teammates.

Griffiths said that, in addition to its Premier League and NFL fanbases, the stadium has entertainment attractions, even if Tottenham remains a football club first. He said: “There’s a lot we can do while still holding onto what brought the fan to the club. The NFL has given us intelligence into the US market in general. There’s been a backlash against NFTs. How do we take that on board?”

Legia Warsaw last month became the first club to partner with an NFT agency. Zahorski said: “The main idea was not to have all the eggs in one basket. It was important to have someone to advise and educate us, and also the fans. You have to prepare well with the strategy and the dialogue. It’s very important to have the fans on your side. Our fans are pretty much conservative, especially the most vocal and most loyal ones, so it’s an area where we really have to work to make sure it makes sense. It’s not an easy process. You have to be really smart about it.”

Gunnarsson said that the Icelandic FA had failed to monetise the national team’s successful appearance at UEFA Euro 2016, but he added: “Next time we’ll be better prepared. The Icelandic market is 350,000 people. If I start segmenting, I end up with one. In the US we ‘spread a lot of Viking-ness’, but locally they’re just our fans.”

Griffiths said that older fans are difficult to change: “It’s the younger fans that we’re able to talk to in more creative ways.” The club’s stadium is not yet attached to a sponsor’s name, and there could also be partnerships with an airline, whose aeroplanes fly over the stadium en route Heathrow.”

Zahorski said that at Lega Warsaw “we are also thinking of commercialising the name of our training facility itself – we’re in discussions about it. During the design and construction phase we partnered with Sony Playstation and each room has a Playstation in it. We have more than 10 partners now: Samsung for TVs and equipment. Part of them are VIK deals, part are sponsorships. Training facilities might be easier for some clubs to commercialise than stadia.”

Gunnarsson said: “I often say that it’s great to have our core fans in our stadium, but you wouldn’t want them in your living room!”

Griffiths said that Tottenham gets huge amounts of data from e-Sports. “For us, its how we don’t lose those people. It’s how we keep them engaged. The demographic that comes across from e-Sports engages with short, sharp trick videos. They then try those tricks themselves. Hopefully they will engage with our app that we’re launching soon. The app is targeted and it will be very dynamic how we use data analytics to inform the app.”

Zahorski said that Legia Warsaw last year also signed a deal with Salesforce to help with its CRM and to understand the fans better.

Gunnarsson said the Icelandic FA has observed that young girls watch both the men’s and the women’s team, but young boys only watch the men’s team. The FA is therefore trying to correct this through social media like Tik Tok and Instagram.

Zahorski said that Legia Warsaw is the biggest club brand in Poland, so it wants to work with top brands. “What we look for is partners who are flexible, meaning we can do something together that is tailor-made. In reality, it’s not that easy. They want to work with clubs pretty much in the same manner everywhere. All of us want to be effective in terms of business, but also in the value we give to fans.”

Gunnarsson said that the FA works with the tourism authority and recently opened a store at the airport.

Zahorski added that a major question is how clubs can use technology to improve the sporting performances of their teams through the use of wearables and other devices. “A lot of technology is already in place, but they are still not being used enough and still not understood well enough by the coaching staff. The main thing the players can improve still is in the cognitive area, because we’re pretty much at the limit physically.”

Clubs can’t ignore what is happening in the wider world. Zahorski said that Legia Warsaw is helping with the refugee crisis in Ukraine, helping women to look for temporary jobs in Poland. “It’s all about being with each other and for each other in these difficult times. It’s all about partnerships.”

At Tottenham, Griffiths said that food was provided by the club to the people of the local area during the pandemic.

Gunnarsson said that the Icelandic FA was reprimanded by UEFA for not having a separate women’s team strategy. But, he said, the FA was able to persuade UEFA that “we don’t have a men’s and women’s strategy: we just have a football strategy. None of our sponsors would be interested in sponsoring the men’s team alone, because it would look bad for them.”

Tomas said that player’s marketability is one of the considerations of the club’s player acquisition strategy and that it also works to prepare its players to appear before the media. “You have to do it very wisely and you have to be creative.”